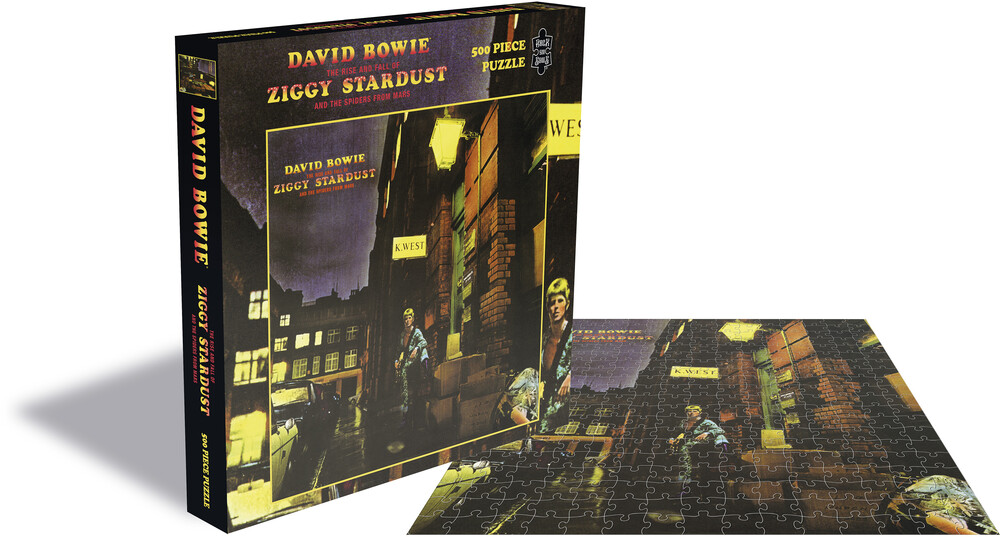 Released in June 1972, "The Rise and Fall of Ziggy Stardust and the Spiders from Mars" is David Bowie's fifth studio album. The album cover photograph by Brian Ward was taken outside furriers "K West" at 23 Heddon Street, London in January1972, looking south-east towards the city centre. Bowie said of the albums packaging "The idea was to hit a look somewhere between the Malcolm McDowell thing with the one mascaraed eyelash and insects. It was the era of Wild Boys, by William Burroughs. ... [It] was a cross between that and Clockwork Orange that really started to put together the shape and the look of what Ziggy and the Spiders were going to become. ... Everything had to be infinitely symbolic. " The cover was among ten chosen by the Royal Mail for a set of "Classic Album Cover" postage stamps issued in 2010. This iconic artwork is now available as a 500 piece jigsaw puzzle printed on high quality board. 500 pieces, Weight: 490g, Jigsaw size: 39cm x 39cm, Box size: 30. 9cm x 30. 9cm x 2. 8cm