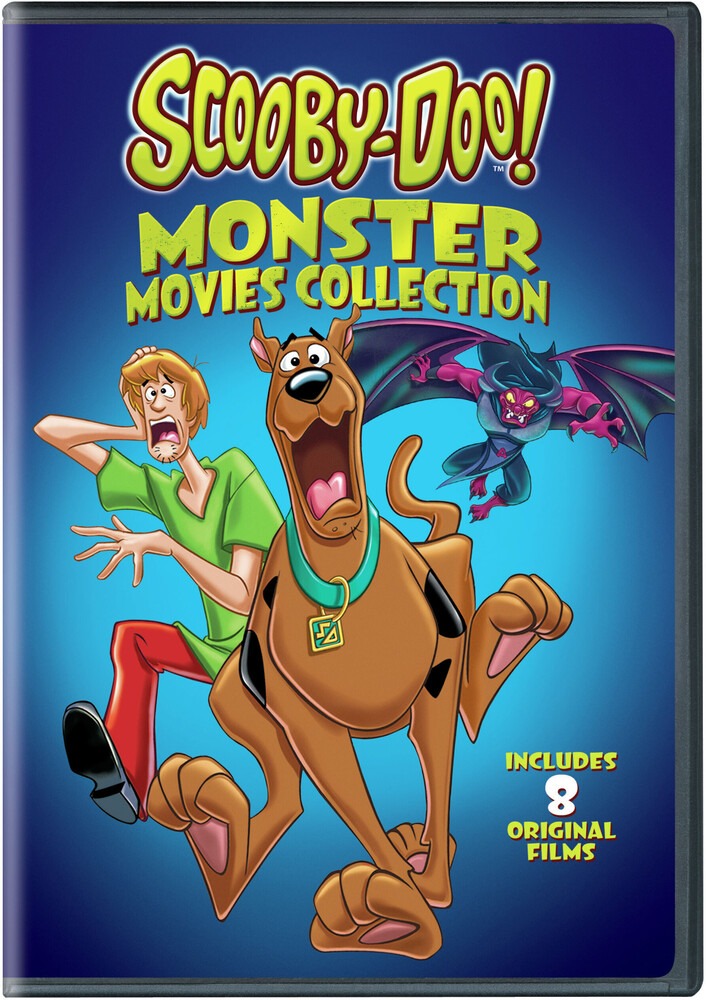 Three-disc set includes: Scooby-Doo And The Witch's Ghost (1999)The ghost-hunting Great Dane and his pals have their work cut out for them when they meet up with a noted horror author and visit a New England town that appears to be haunted by the spirit of a vengeful witch in this feature-length mystery. Voiced by Scott Innes, Mary Kay Bergman, Frank Welker, B.J. Ward, Tim Curry, and Kimberly Brooks. 77 min. C/Rtg: NR Scooby-Doo And The Legend Of The Vampire (2003)It's funny fang frights Down Under when Scooby, Shaggy and the gang head to Australia for a music festival and wind up tangling with a villainous vampire in this feature-length tale. Voiced by Frank Welker, Casey Kasem, Nicole Jaffe, Heather North, Jennifer Hale, Kimberly Brooks, and Jane Wiedlin. 73 min. C/Rtg: NR Scooby-Doo And The Loch Ness Monster (2004)Scooby-Doo, where are you? Scotland, that's where! Join Scoob and the rest of the Mystery Inc. Gang as they travel to Daphne's family's ancestral castle to get to the bottom of one of history's most famous monster stories. Voiced by Frank Welker, Casey Kasem, Mindy Cohn, Grey DeLisle, Michael Bell, Jeff Bennett, John DiMaggio, and Sheena Easton. 74 min. C/Rtg: NR Scooby-Doo In Where's My Mummy? (2005)When she discovers the tomb of Cleopatra hidden deep inside the Sphinx, Velma calls on Scoob and the gang to help her unravel the mystery of an ancient curse that could resurrect a legion of mummified monsters. Get wrapped up in the adventure with this fun-filled, feature-length animated tale. Voiced by Frank Welker, Casey Kasem, Mindy Cohn, Grey DeLisle, Christine Baranski, Ron Perlman, Jeremy Piven, Wynton Marsalis, and Virginia Madsen. C/Rtg: G Scooby-Doo!: Music Of The Vampire (2012)No sooner is the lovely Daphne cast in a vampire film than a real creature of the night shows up to choose a wife. Now, Scooby-Doo and the rest of the gang get involved to rescue their friend and unravel another baffling, funny, and scary animated mystery adventure (plus, it's a musical!). Stars the voices of Frank Welker, Mindy Cohn, and Matthew Lillard. 78 min. C/Rtg: NR Scooby-Doo!: Frankencreepy (2014)When Velma inherits a castle in Pennsylvania (!), she and Fred, Daphne, Shaggy, and Scooby-Doo head out to look at the reportedly cursed property... only to have the Mystery Machine blown to smithereens by a ghost! Now, "those meddling kids" must see if Velma's family has any skeletons in the closet... or monsters... or other no-goodniks out to spook the locals! Stars the voices of Frank Welker, Mindy Cohn, and Matthew Lillard. 74 min. C/Rtg: R Scooby-Doo!: Moon Monster Madness (2015)The Mystery Machine gang has a truly out-of-this-world adventure when Fred, Daphne, Velma, Shaggy, and Scooby-Doo win a lottery to be launched into space aboard a billionaire's new ship. But they soon find out they've got an extra passenger-a scary alien who sends them crash-landing on the dark side of the moon! Also features a program about the famous Space Camp in Huntsville, Alabama, hosted by star Mindy Cohn (the voice of Velma). 72 min. C/Rtg: NR Scooby-Doo! And The Curse Of The 13th Ghost (2019)C/Rtg: NR